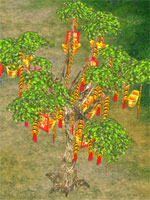 Prosperous Packet.
All types of packets can be sold via stall or opened to get tickets, potions,

Heaven's Berries and many other useful items!

Is a great system for new players to get into the game by being the disciple of a mentor, meaning that a bit more experienced player can send a disciple application to a person asking them if they will be her/he's disciple.

Fairy Coins when they reach lvl 41.
- Before reaching level 41, disciple also gets one

Mini Amplifier of Strive each level, which will increase your exp gain by 100% for 200 seconds, per usage for players below level 40.

So what's the Mentor's Job?
The mentor's job is to help and aid their disciple in progressing through the game, by helping them to level up and in general just help that person with their tasks/troubles.

What's the disciple's job?
Asking questions, finding answers on problems that they have stumbled upon, and being polite to their mentor as they will spend a lot of time being helped.

You also can obtain valuable items from

You can use these scrolls manually to obtain Treasure Maps and dig treasures or sell them using a stall. (The cost of items can be looked up in the nearby stalls)
However if you want to get all the treasures yourself:
For example, from

NSS! You should go to Treasure Gulf. You can get there by sea, sailing south from Shaitan there is a whirlpool (877,3756) which will lead you to the location you need.

Caribbean Treasure Map. Double-click the map again to find a treasure!
Talking of

OSS, after using it you will be given

Ancient Pirate Treasure Map. On double-click system chat will show you the coords where the treasure is at. It can be anywhere on the World Map starting from Lone Tower to Icespire Haven. When you reach the destination coordinates double-click the map to find a treasure!

Various blueprints are very valuable in the world of Tales of Pirates, such as:

Invocation Blueprint
These blueprints can be sold by stalling them or opened, to get various recipes for cooking, manufacturing and crafting!

Cooking - is an important part of the game. Additional stats and attribute bonuses are always helpful and good to have in a battle! This is why cooking is relevant and you also can earn money on selling it.

Manufacturing - is also one of the key elements in the game.
Every successful pirate should be using it in his fights to blind their enemies with Flash bombs or finding hidden crusaders using Soul detectors! And in the end of the day it's not joyful to sail overseas without Ship accelerators and Hull repairs.
Prices for cooking and manufacturing products can be looked up in the stalls around main cities.

At a higher level and with a well-geared character, you can farm at Summer Island.
The monsters we are looking for are called Evil Tribal Warriors, kill them to obtain

Mystic chests!
By opening mystic chests you are able to get different items and jewelry in particular. If it’s not valuable to you, just sell it to an NPC for gold. But look at the items attentively.
There is a chance to get stuff with high stats, which can be sold for a very high amount of gold to the players.